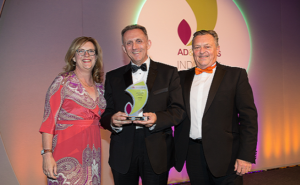 Following the UK’s vote to leave the European Union, concerns have been raised about the wide-ranging impact faced by existing AD operators, the supply chain and future developers within the AD industry.

Suffice to say the recent Brexit result didn’t dampen our fifth consecutive year at the annual UK AD & Biogas exhibition, held at the Birmingham NEC. Over the course of the show, we saw an increase in visitors with live projects from last year; the team gained numerous promising enquiries and our Digestate Concentration System (DCS) was subject to great interest.

The HRS Digestate Concentration System not only reduces the volume of digestate produced while maintaining the nutrient concentration, but it also reuses as much heat as possible, improving process efficiency of the entire AD plant.

The HRS team and our valued customers were in attendance at the UK AD & Biogas Industry Awards, an evening which showcases achievement and innovation across the AD industry. HRS proudly sponsored Best Food & Drink AD Project presented by Steven Pither, Managing Director for HRS Heat Exchangers. Our client Muntons won the category and was awarded for their highly efficient AD plant which incorporates the award-winning HRS Digestate Pasteurisation System (DPS). Clearfleau also clients of HRS were also awarded a high commendation award within this category.

HRS will exhibit at the next annual UK AD & Biogas exhibition held at the National Exhibition Centre, Birmingham 5th-6th July 2017. The team are looking forward to returning to UK AD & Biogas, where plans are in place to create another impressive stand to showcase our innovative technologies.