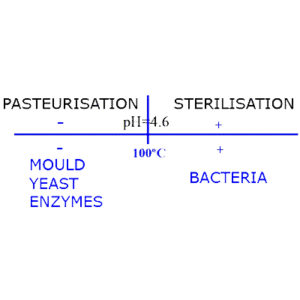 The thermal treatment of food is necessary in order to:

The four principal objectives of the application of thermal treatment are:

The thermal treatment depends on:

Thermal Treatment encompasses a range of procedures, but the principle ones are pasteurisation and sterilisation, which are designed to destroy microbes, rather than scalding or cooking, which also achieve a reduction in microbial content, but whose principal objective is a variation in the structure of the food.

Pasteurisation implies the destruction, by the application of heat, of all of those organisms in a vegetative state which would produce illness, or the destruction or reduction in the number of those organisms which would produce alterations in certain foods, such as high acid foods (with a pH less than 4.6). In these foods, the only micro-organisms which develop are those which alter the food but which are not pathogenic to man.

Sterilisation signifies the destruction of all viable organisms and their spores which could be cultivated using appropriate techniques by means of the application of temperatures in excess of 100°C.

For example, a low acid food (pH>4.6) requires heating above 100°C, generally between 116°C and 130°C for a time which is sufficient to reduce the number of Clostridium botulinium spores by the value of 1012. However, high acid foods (fruit juices) do not need such intensive treatment as bacteriological development does not take place at these pH values.

Nevertheless, normal practice inclines towards the application of the higher temperatures with a consequent reduction in processing times, which enables the product to retain the nutritional and organic properties to a maximum. HTST pasteurisation has a high degree of acceptance in the food industry given the operational efficiency which it brings. Properly operated these units allow high production volumes with minimum space. The principle of this system lies in establishing an appropriate relationship between the process variables of time-temperature-pressure.

Although the principal objective may be the destruction of the micro-organisms it must not be forgotten that other processes take place, some of which may be desirable (enzyme destruction, softening of the tissues) but must still be controlled, and other less desirable effects (destruction of nutrients, loss of organic qualities). Any thermal treatment has the potential to affect other components such as enzymes, proteins, vitamins etc, which can in turn affect the physical properties: colour, form, consistency etc.

Given the complexity of the potential effects of thermal treatments on foods it is necessary to optimise the way in which we achieve the results required in each case. Any thermal treatment must be adjusted to maximise the desirable results and minimise the undesirables which inevitably leads to choosing conditions which compromise between one and the other but which give an overall result which is acceptable.