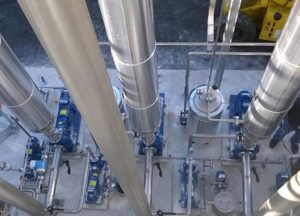 Zero liquid discharge (ZLD) is a technique whereby liquid waste streams from industrial plants are eliminated. These are instead replaced with clean water, which can be reused in the process, and the minimum amount of solid residues, which often include valuable by-products that can be sold or reused.

ZLD is suitable for a wide range of industries, including power production, chemical and fuel refining, mining, distillation, food production, and waste treatment, and a variety of equipment is available to treat different waste streams and processes. However, this diversity is also one of the drawbacks of ZLD, as every system must be designed on its own merits, considering factors such as the contamination or chemicals present in the water, flow rate, how pure the returned water needs to be, etc.

Although every ZLD system will be different, many will comprise a pre-treatment phase, an evaporation phase to remove most of the water, and a further concentration or crystallization phase to produce the final solid residue. Pre-treatment often focuses on removing organic elements and any chemicals which could damage evaporation or other equipment later in the process. Most common water treatments, such as pH adjustment, flocculation, membrane processing, degasification, oxidation, separation and even aerobic and anaerobic digestion, have all been used as pre-treatments for ZLD systems.

Traditionally, vapor compression evaporation has been the main method employed for ZLD processing, with evaporation typically recovering around 95% of wastewater as distillate. Any remaining concentrate is then further treated physically or chemically to produce solid residues (such as crystals) and water. Evaporators used in ZLD systems are often run at lower pressures in order to reduce the boiling point of the liquid being treated. This has three benefits: less energy is required so energy costs are reduced; the formation of many hydrates and salts occurs at lower concentrations at lower temperatures; and it allows the temperature of any remaining concentrate to be raised during subsequent processing.

Whatever kind of evaporator is employed, heat exchangers can play a crucial role in reducing the running costs of a ZLD system by utilizing heat from process water and other existing sources, and also recapturing heat at the end of the process and reusing it to boost the energy efficiency of the overall ZLD system.

HRS is currently installing a ZLD system for an industrial client in Europe. This contains the following three process steps:

Both the evaporation and cooling steps result in a high degree of material fouling on the inside of the equipment, so HRS Unicus Series scraped-surface heat exchangers are used to maintain thermal efficiency and remove fouling as it occurs. Coupled with HRS R Series coolers and custom-designed crystallization tanks, the result is an efficient process which can work continuously without requiring scheduled downtime.