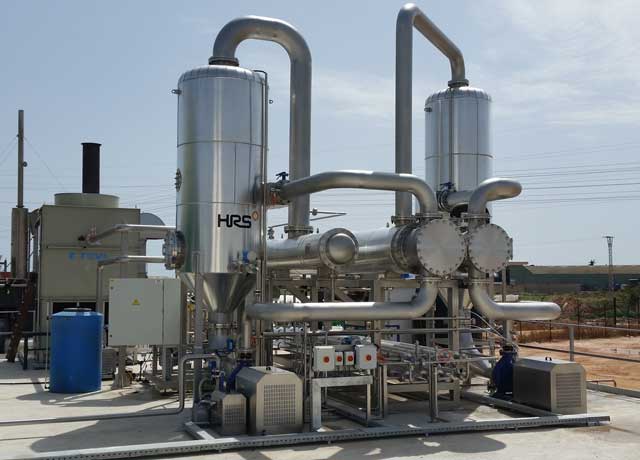 Liquid and semi-liquid waste streams are an unavoidable aspect of many industrial processes, from energy production to food manufacturing; from chemical processing to wastewater treatment; systems which can reduce the volume and water content of such waste streams can not only cut disposal costs, but often turn a waste into a potentially valuable resource.

Evaporation is an efficient way of reducing the volume of effluents and wastes. HRS evaporation systems raise effluent, digestate or liquid waste to its boiling point so that water is evaporated and then condensed, thereby obtaining a concentrated end product and water. Forced recirculation uses a pump to send the product through the evaporator at high speeds, ensuring that heat transfer rates remain high and the negative effects of fouling are limited.

There are three main types of HRS evaporation system:

HRS scraped surface evaporation systems
When concentrating fluids with elevated viscosities (which lowers heat transfer) or those which have a higher fouling risk, such as organic solutions with high dry matter concentration, HRS uses the HRS Unicus Series of scraped-surface heat exchangers.

HRS Digestate Concentration System
The HRS Digestate Concentration System (DCS) is specifically designed to reduce the volume of digestate from anaerobic digestion (AD) systems. In most situations the process utilises surplus heat from the CHP engine. The DCS works by superheating digestate in a vacuum to facilitate concentration, using evaporation to significantly reduce digestate volumes while, at the same time, increasing the nutrient content and commercial value.

The HRS DCS is a multi-effect system in which the steam produced from this first heating cycle is re-used as the heating media for the second, and subsequent, effects. After the final effect, the steam is condensed back into water and can then be used to dilute feedstock going into the front end of the digester, creating a completely closed loop system. The DCS is wholly self-sufficient – no energy or water is brought in or wasted, and everything is re-used.