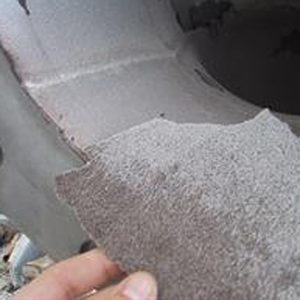 The fouling factors to be used in the design of heat exchangers are normally specified by the client based on their experience of running the plant or process. If uncontrolled, levels of fouling can negate any benefits produced by careful heat exchanger design. The fouling factor represents the theoretical resistance to heat flow due to a build-up of a layer of dirt or other fouling substance on the tube surfaces of the heat exchanger, but they are often overstated by the end user in an attempt to minimize the frequency of cleaning. In reality, if the wrong fouling factor is used, cleaning may actually be required more frequently.

The use of corrugated tubes has been shown in be beneficial in minimizing the effects of at least two of these fouling mechanisms: deposition fouling because of an enhanced level of turbulence generated at lower velocities, and chemical fouling. Chemical fouling is reduced because the enhanced heat transfer coefficients produced by the corrugated tube result in tube wall temperatures closer to the bulk fluid temperature of the working fluids.