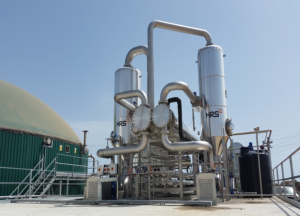 The President praised the significance of the efficient biogas plant and commented: “Kernel Export is a modern company that has grown within the traditional agricultural sector and has become a true example of the Vanguard Group.”

Kernel Export, a leading producer of vegetables and salads, grows and produces over 25,000 tonnes of crops to include 400 tonnes of organic vegetables on more than 2,000 hectares of land.

The biogas plant processes more than 19,000 tonnes of waste annually via the anaerobic digester and will create 5,400 tonnes of spreadable digestate. The new AD plant already generates enough heat and electricity for 50% of Kernel Export’s on-site storage facilities. Aside from the significant financial energy savings, it is estimated that the plant will save more than 2,000 tonnes of CO2e each year, which is the equivalent energy used by 200 homes. The innovative system will recover 40% of the company’s energy consumption.

The plant’s biogas is created through the process of anaerobic digestion, aided by digestate processing, successfully achieved by the HRS Digestate Concentration System (DCS). The HRS DCS uses a multi-effect concentration process using forced re-circulation to process the digestate, while ensuring that all the valuable crop nutrients are retained in a more concentrated form. The HRS DCS promotes environmental advantages by converting agricultural waste into energy and producing a highly valuable fertilizer.

Under local rules, unprocessed digestate cannot be applied in Murcia. However, the HRS DCS overcomes this obstacle and is a key part of utilizing the nutrient rich digestate effectively. The innovative system has been designed to reduce the volume of material to be stored and transported (50 tonnes per day) while maintaining its value as an organic fertilizer. Concentrated digestate will be used as a biofertilizer, while the water removed from the process will be cleaned and utilized to irrigate suitable crops such as salads and vegetables.

The project truly demonstrates how important it is to invest in the production of environmentally clean energy whilst delivering financial savings, jobs and growth for the agricultural market.