Contact Us
home News How To… Specify a Heat Exchanger 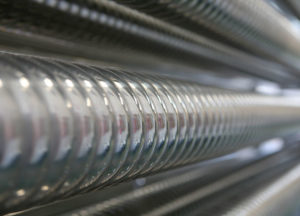 Heat exchangers are a well established tool for the thermal processing of materials. They are used for cooking, pasteurisation and sterilisation, as well as for heating or cooling a range of products.

When it comes to designing a heat exchanger, there are two main considerations. The first is to select the right type of heat exchanger: plate, tubular, corrugated tube, scraped surface, etc. Various factors will influence this choice, including the nature of the materials to be heated or cooled, the objective of the process (such as cooking or pasteurisation) and any restrictions of the environment where the heat exchanger is to be used. The second consideration is size; it is imperative that the heat exchanger selected is correctly sized for the job.

Chemical fouling:
This occurs when chemical changes within the fluid cause a fouling layer to be deposited onto the tube surface. A common example is scaling in a kettle or boiler caused by ‘hardness’ salts depositing onto the heating elements as the solubility of the salts reduce with increasing temperature. This is outside the control of the heat exchanger designer but can be minimised by careful control of the tube wall temperature in contact with the fluid. When this type of fouling occurs it must be removed by either chemical treatment or mechanical de-scaling processes (wire brushes or even drills to remove the scale, or sometimes high-pressure water jets).

Deposition fouling:
This is when particles contained within the fluid settle out onto the surface when the fluid velocity falls below a critical level. To a large extent this is within the control of the heat exchanger designer, as the critical velocity for any fluid/particle combination can be calculated to allow a design to be developed with minimum velocity levels higher than the critical level. Mounting the heat exchanger vertically can also minimise the effect as gravity would tend to pull the particles out of the heat exchanger away from the heat transfer surface, even at low velocity levels. When this type of fouling occurs it is normally removed by mechanical brushing processes.

Corrosion fouling:
This is when a layer of corrosion products build up on the surfaces of the tube forming an extra layer of usually high thermal resistance material. By careful choice of construction materials the effects can be minimised, as a wide range of corrosion resistant materials based on stainless steel and other nickel-based alloys are now available to the heat exchanger manufacturer.

Thermal Calculation:
The objective of this stage is to obtain the shell and tube side heat transfer coefficients. These coefficients depend on the four key fluid parameters and the velocity of the fluid. The relation between the parameters and the heat transfer coefficients is defined in a mathematical formula that is specific to the geometry (i.e. the type of heat exchanger used: tubular, plate, corrugated tube). For example, HRS Heat Exchangers has its own specific formulae for use with corrugated tubes.