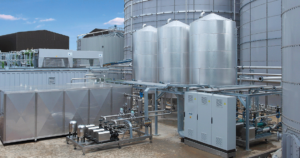 With biogas combustion heat tariffs under the Non-Domestic RHI between 2.2 and 7.5 p/kWth and heat from an LPG-fuelled boiler currently costing somewhere around 6.6 p/kWth, the price of heat is self-evident. With a typical gas engine producing half its output as usable heat, the heat produced by a 300 kWe engine could be worth as much as £124,000 a year under the RHI before tariff degression is considered.

If you are planning or operating an anaerobic digestion (AD) biogas plant, it makes sense to maximise the efficiency of the process at all stages. However, not utilising the heat naturally generated as part of the process could be costing you thousands of pounds a year, particularly if you are adding heat elsewhere.

Optimal AD plant performance can be achieved by fine-tuning the feedstock mixture and retention times to maximise biogas production, as well as regularly servicing the CHP engine to maintain electricity generation. But some aspects are overlooked, such as the waste heat from the engine. Some plants use it for digester heating or pasteurisation, while others don’t use it at all. This is potentially wasting a resource worth thousands of pounds each year. If you are generating heat separately for a different part of the process, such as drying or concentrating digestate (the organic biofertiliser output from the AD process), then you are also paying for heat which you may be able to get for free.

One solution is to capture and transfer this wasted heat with heat exchangers. These are an established way of capturing the heat generated in one part of a process, and transferring it for use in another. However, despite their widespread use in industries such as food manufacturing and the chemical sector, they are under-utilised in the AD industry.

There are four main areas of the AD process where heat, which is available and may otherwise be wasted, can be utilised: feedstock pre-heating, digester heating, pasteurisation and evaporation. Which ones are most suitable or useful will depend on your exact situation, but even if it isn’t feasible to use the heat as part of your AD process, surplus heat can still be used for other purposes such as drying processes, heating nearby offices or workshops, or hot water for washing down equipment.

Using surplus heat in this way is also free, without the need to buy additional fuel, and all of these applications can be fulfilled using a suitable heat exchanger, often with benefits over other technologies such as the tank heating systems often used for pasteurisation. A well designed system could recover and utilise 40% of the heat produced by the plant.

Using heat exchangers in the pasteurisation system is more efficient than using tanks with heating jackets as they have a much lower heat requirement; up to half of that of some systems. This is because tank systems have lower heat transfer efficiency and usually dump the hot water after use, rather than reclaiming it. Using heat exchangers means that effective pasteurisation of digestate, for example to comply with PAS 110, is possible using surplus heat rather than the installation of an additional heat source such as biomass boiler which could add hundreds of thousands of pounds to your project. Using a well-designed heat exchanger system can provide you with a continuous pasteurisation process which uses less energy than alternative systems, while allowing additional thermal regeneration, or recovery, levels of up to 60 per cent. This saved heat can then be used elsewhere in the process, such as an evaporation plant, helping you to maximise your RHI eligibility

Heat can also be used to separate water from digestate by evaporation. This technique can reduce the overall quantity of digestate leaving the plant by as much as 80%, greatly reducing the transport costs associated with the removal of digestate. A well designed system will include measures to retain the valuable nutrients in the digestate while the evaporated water can be condensed and reused. For example, the captured water can be added back to the feedstock as it enters the digester, making the entire process almost self-sufficient in terms of water use and eliminating liquid discharges from the plant. After evaporation, the treated digestate dry solid content can be as much as 20% (often a fourfold improvement), making it much easier to transport and handle.

Tariff degression, increasing competition and environmental concerns mean that efficiency is directly linked to the operational sustainability of a plant. Incorporating cost-effective heat exchanger systems into the process from the beginning, or retrofitting them to an existing plant, is one of the easiest ways to ensure future financial feasibility and save hundreds of thousands of pounds each year.